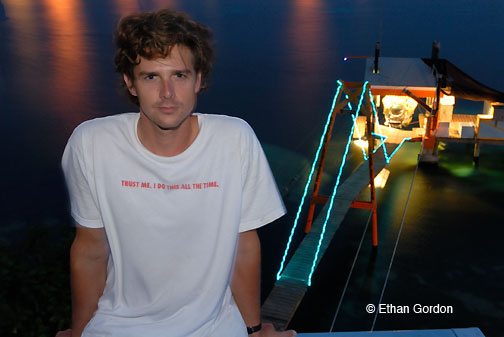 Karl Stanley has spent over three-quarters of his life pursuing his desire to explore the planet’s “final frontier”. He has designed and built two deep-diving submersibles which he has piloted in three different countries. At the age of 24, he began his career taking  expeditions down to 700 feet off Roatan, Honduras.

Few people have accumulated as many hours directly observing deep-sea aquatic life as Karl Stanley. Karl has recorded over 2500 dives ranging from 500 to 2660 feet underwater, each lasting from a few hours up to seventeen hours at a time.  He has logged over 5000 hours of experience piloting a deep submersible, making him one of the most experienced submersible pilots in the world.

Thomas Trudel is the Head Engineer and second pilot at the Roatan Institute of Deepsea Exploration (RIDE). Over the last 8 years at RIDE, Thomas has been responsible for mission critical improvements to Idabel, the flagship submersible at RIDE, including new windows, structural components, and electronic systems.

In 2017, Thomas designed and built custom scientific equipment used to collect biological samples for the Smithsonian Tropical Research Institute and University of Washington. This streamlined system enabled the scientists from STRI and UW to capture nearly thirty fish samples, five of which were new species, at a significantly lower cost than competitive systems. Without this reduction in cost, the project would not have been possible.