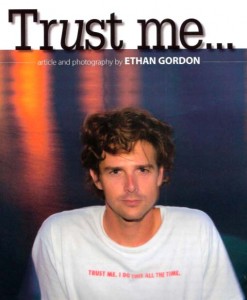 It was just past midnight and I was starting to fade. So were my companions Karl Stanley and his girlfriend Jan Olson. We were sitting on the bottom of the ocean in Karl’s submersible, Idabel. Sixteen hundred feet of saltwater separated us from the surface. Jan and I dozed in the forward passenger compartment while Karl worked quietly just behind us in the cockpit. Mechanical noises came and went: the air scrubber, the oxygen regulator, a toggle switch were and there. It all helped lull me to sleep. If it weren’t for the cold condensation that occasionally dripped on my head, it was have been the perfect place for a good night’s rest. However, I wasn’t supposed to be resting. It was my watch.

Try as I might, my eyelids were heavy and I blinked for undetermined amounts of time. But, somewhere between dreamland and reality, if a difference exists and this depth, I spotted an apparition the sub. “Shark,” I began to yell, but stifled it. A giant for glided past our window and back into the darkness. Silently the specter of the deep had passed.